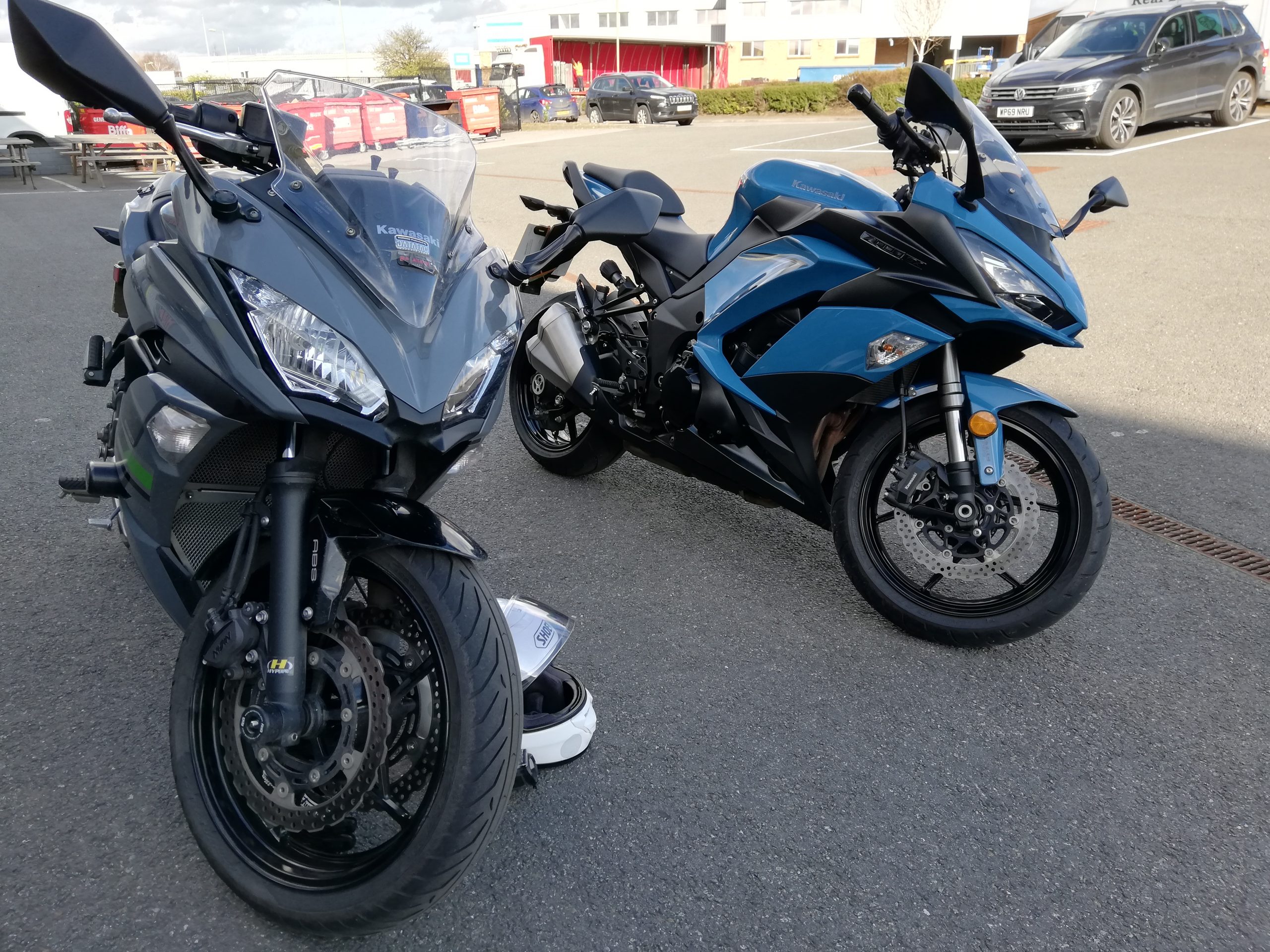 I’m a latecomer to biking. You could say I’m a “mid-life crisis” biker, having started to learn at the tender age of 44. After doing CBT and one year of practice riding (a.k.a. commuting) from Newbury Park into the City on my Honda CB125, and with quite a few training sessions from CAM Rider in Harlow, I had finally passed my DAS. Hooray!

Now it was time to ditch the L-plates, move the 125 on and get a “big bike”. This is the process I went through to choose that bike.

First of all: what was I going to use the bike for? Initially, I thought it would be to do some commuting. I simply could not stand to travel by Underground any more, after nearly three decades of taking it nearly every day, having trains cancelled on me, being squashed, getting overheated, and paying through the nose to TfL. However, circumstances had changed, and with the company I worked for having exited the UK, I found myself working from home and commuting across my garden. So a good commuter was not top of the requirements. This would be a bike for pleasure rides only. Maybe the odd short tour. Perhaps a sports tourer?

Second consideration for me is that, at the time, I was not very knowledgeable as far as mechanical repairs were concerned. Show me a broken exchange trading system or market data feed, and I could probably tell you what was wrong; but a bike that wouldn’t start? My first (and only) question would likely be “Can I fix that with a hammer?”. So through pure prejudice I assumed that I’d best go with some Japanese manufacturer, having heard plenty of poor reliability takes regarding European manufacturers, and Ducati… Though for some reason, I also threw BMW into the mix as a possibility. Surely German bikes would be reliable!?

I admit, this was just based on prejudice and hearsay, not personal experience. Nonetheless, impressions are hard to change, especially for the unknowledgeable (i.e., me).

Third factor was looks. I like a bike with a fairing. I’m a child of the 80s and on my walls back then were bikes like the GSX-R 750 and the RD350. They had fairings and a screen, and that’s what I still wanted back then. Finally, I didn’t want something with too much power. I wanted something that didn’t scare me too much, and that wasn’t super expensive in case I ended up binning it.

So, after reading way too many magazine and web reviews, and watching too many YouTube videos (some even about motorcycles!), and poking around the NEC show for an entire day, I booked a few test rides: a Suzuki DL650 V-Strom; and BMW F800GT, and a dual test on Kawasakis: a Z650 followed by a Ninja 650 (basically the same bike, engine etc, just one faired and one naked. I really liked the Suzuki, but it was a tad on the tall side for me (I’m 5’7” with a 30” inseam, and I didn’t trust my skill level to properly plan a one-footed stop every time). I really liked the BMW, it had a belt drive, but I felt it was a bit pricey and had too many electronics for me. I wanted something where I had to develop my skills and not rely on traction control etc. And between the two Kawasaki 650s, I settled on the faired version (obviously!).

So in January 2018, I bought the very bike I had test-ridden, as an ex-demo model from Bacon’s Kawasaki in Newbury Park. I named her Veronica and we’ve had some lovely fun.

I absolutely loved this bike. I think it was the perfect first big bike for me, no regrets. It’s great for the back roads and social rides, it’s fun on track (if a little under-powered), it’s comfortable (the clip-ons are on really big bar risers, so I’m not riding on my wrists and my back is not bent), I can and have ridden her all day (to Cadwell Park, and all the way to Folembray!) with no aches. It has all the power I’ve needed, and her abilities far exceed my own.

I changed two things on Veronica: the OEM tyres were not very confidence-inspiring in the wet, so I swapped them for Pirelli Angel GTs which are so much better; and I upgraded the fork springs to Hyperpro progressive springs. This firmed up the front which, together with setting up the preload on the shock absorber, smoothed out the rough edges on the riding.

After riding Veronica for over two years and nearly 9,000 miles, having used it to train for IAM and pass my test, travel to Folembray, go on many social rides, even leading a couple of them, and also going on a couple of UK track days, what are my thoughts?

It’s a great bike, I could live with it for many more years, but it is lacking in some aspects which have now emerged. My daughter wants to come riding pillion with me on a semi-regular basis, and I want to take my dad on a one-week tour in the summer. I’m afraid Veronica just isn’t up to doing that at a comfortable level. So I’m not getting ready to say goodbye to my first motorcycle love…