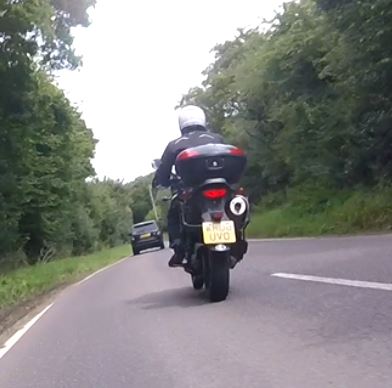 I thought I’d get there a little early, 30 minutes, so I could have a coffee and look over the Observers’ Handbook and my notes before the test. But as I headed for our usual parking spot at Harlow McDonald’s I saw a parked up gleaming blue and white GSA. Ah man, there goes the last minute prep, still at least I’ll finish earlier.

The Examiner was decent enough, he spotted me walking in the door and bought me a coffee, latte – for anyone wondering what to get me, thanks. So with intros and welcomes over we settled into a chat about riding, observing and ELAM. And then to business, ‘Let’s start your National Observer Test.’

I had an email from John, the Examiner, a couple of weeks earlier. Test Instructions, simple enough. The examination scenario is that the Associate has a problem applying the System to bends. I need to prepare a pre-ride briefing, a route, a mid-route brief and a  final debrief all lasting no more than an hour and a half. John will play the role of the Associate.

And so the role play begins. Not so bad once you get into it. I forgot he was an examiner and treated him just like one of our associates, asking him what he rides, how long he’s been riding and what exactly is it about bends that needs improving? His answer, ‘Position.’ Turns out he thinks there’s too much crap near the kerb and he favours position C on all bends including right handers. Okay, this should be simple enough. We talked it through a bit but he was being dense. I’m not getting through to him. Panic! Bloody Examiner’s being a di…

Well hang on a minute, the fact is they want us to pass. He’s dropping clues into the conversation, ‘I understand all the words but I learn best actually trying it.’ The penny drops for me. Sweet, no more jibber jabber, let’s ride a few bends!

But this is the IAM so I pull out my prepared check sheet:
Declaration signed? Check
Eye test? Check
Disclaimer given? Check
Powders? I did the R and rear lights, he added some technology questions. ‘Can I use cruise control? Is it okay to change my suspension settings while I’m riding? I want to connect my sat nav, is that okay?’ GS rider right! They are all the same! He even had the GS uniform, you know the one, two tone textiles, flip-lid and an intercom. [Picture of Nigel here maybe?]

Anyway, all the essential questions and statements later we’re riding. I’m planning to stop at Hatfield Heath for the mid-ride brief but approaching every single right hand bend he really is taking position C and at the last second switching to B or A. It’s role play after all, you don’t really think he’d actually take a right hand bend in C do you?!

If this was a real world scenario, I’d stop the ride immediately and talk this through… so… bugger! I need to stop him early. Where? I didn’t plan for this! Can’t overtake him, he’s on the speed limit all the time. And there it is, pub, nice big car park. Indicator on, beep the horn. He gets it, remember he wants to pass me, he pulls into the pub car park and we have a mid-ride debrief after just 5 minutes. Does this seem familiar to you?

Now he’s not being dense, he’s answering my questions and asking the right ones, tells me he gets it now and wants to try it out.
The rest of the ride is ace. Well, sort of. I start to notice other things, pulling away from traffic lights before the green, looking at houses instead of the road. Is this part of the role play?? I don’t want to start pointing these extra traits out if it’s his normal ride, he’s an examiner after all. What do I do?

Okay, time for the final debrief. I praise him for his ride, tell him he’s nailed it and we go over the next steps, like the check test and booking a test. And he solves the what do I do dilemma for me. Before I decide to mention it, he tells me I have passed this part of the test. Awesome. We seem to be getting along so I ask about the other traits and yes, jumping the lights was deliberate. He likes to throw something else into the mix to see if it’s picked up. Looking at the houses? Well he reckons they were really nice and worth the longer look!

Not done yet. Now I have to ride for 30 minutes so he can assess my riding – it needs to be significantly higher than the Advanced Rider Test Standard and that of a Local Observer. Oh come on! I lost him, twice. Yep, on the Transalp.
Result, PASS.

I want to say a special thanks to Chief Observer – Steve Silcocks,  and to Paul Gillett, Jacqui Barnard and Rick Brown. Thanks all, your guidance has been brilliant.

Ever thought of getting more involved?
Want to lead a ride? See what it’s like to become an Observer? Please get in touch if you do.

Anthony McNamara
Anthony joined ELAM in 2014 on a Honda Varadero after riding for just six months. Since then he’s had two Z1000sx, one of which he still has and he also owns a Transalp. After passing his test he’s led a few social rides, become a LO, treated himself to a few track days and several tours of France. Since 2018 he’s been our Group Chair and now our newest NO.