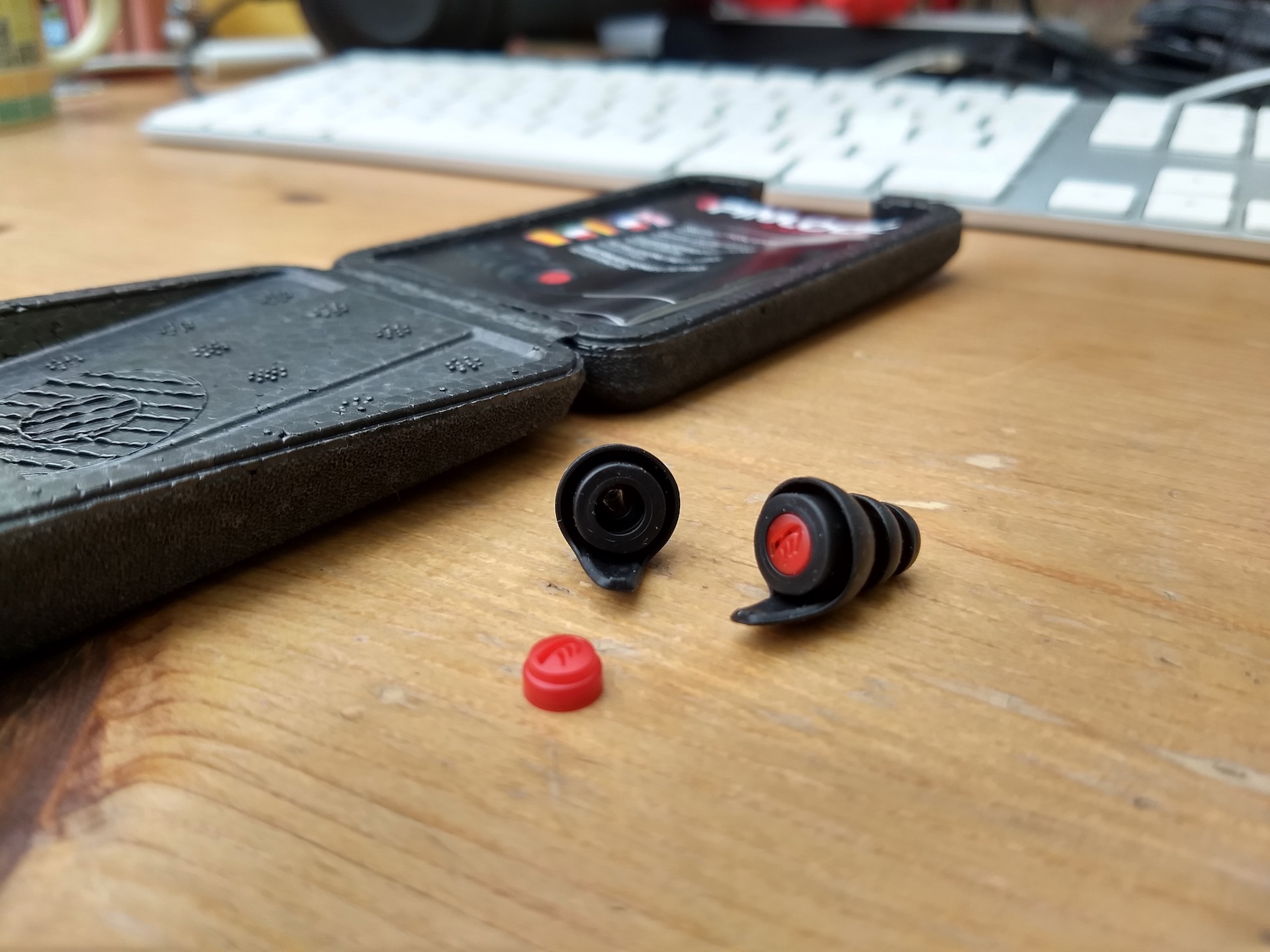 It’s a well-known fact that riding a motorbike fast is bloody noisy. Stock exhaust or not, wind noise can often drown out your bike at speeds upwards of 50 mph. Even with a good quiet helmet like a Schuberth, the wind noise can have a deceptive impact on your ride and the health of your ears. Excessive noise can obviously cause hearing damage, tinnitus etc. But less obvious is the fatigue it can cause as your brain unconsciously tries to process and block out the noise. As such, it’s highly recommended to wear earplugs to reduce wind noise and to maintain your concentration on riding.

One disadvantage of earplugs is they can block out too much noise, making it difficult to talk to other people, either when parked up, pillions behind or mates over Bluetooth helmet intercoms. So, when I saw Pinlock had released a set of motorcycle earplugs with a special core that selectively blocked out higher frequencies like wind noise but let through lower frequencies like voice, I was most intrigued and purchased a couple of pairs for Mary and myself to try out.

The Pinlock Earplugs arrived in expanded foam cases, which is nicely moulded to sit the plugs and instructions inside. All very well, but it’s a bit large to stash in a pocket when riding around, not like you need instructions for earplugs out on the road… Come on Pinlock, most other brands of plugs are supplied with a mini plastic box and Auritech supply a cool aluminium cylinder to store their plugs. So, budget on getting something else smaller to store them in when off your bike at the tea hut. Unlike other brands, Pinlock does supply two sizes in the case, a large and medium, which is great to accommodate different ears. This gets my thumbs up as I found the large size too big for my ears.

The Pinlocks earplugs themselves are made from silicone in a common triple half dome stack style arrangement like many other brands of earplugs. In the centre of the earplugs is a removable red filter – removable as you only get one pair of these, so you need to swap into the plug size that suits your ears. Don’t do as Mary did on the first ride, and pick up the smaller size with no filter in them to go riding and wonder why they didn’t block much noise…

Unlike other plugs which have a central shaft to hold onto when squishing them into and out of your ears, the Pinlocks earplugs just have a very small protrusion on one side. This has pros and cons, it is small enough to avoid the plugs getting knocked out when donning your helmet, but it can make fitting and removing the plugs tricky. Especially if you inadvertently locate the grab handle flush against your tragus (the front lobe of your ear covering your ear hole), it is then extremely difficult to get hold of it to pull them out. They really could do with more to grab hold of. Both Mary and myself have had instances where we’ve been stuck fighting for 5 minutes odd to remove one out of our ears, not ideal.

Maybe I have unusually small ears, but I’d like to try a size smaller than the supplied medium, as I find them a struggle to push them into my ears far enough to form a good seal. A spot of saliva helps get them to slide in though. Whilst in your ear, they’re comfortable and easy to forget.

So how do they perform? They certainly let more of the lower frequencies through compared to over earplugs we’ve used (basic foam and other generic silicone plugs), which does make it easier to hear one another over the intercoms. However, I found the extra noise they let through was still enough to cause fatigue on long journeys. Such that on recent touring, I often swapped to other earplugs to cut more noise out. If I’m riding solo and not chatting with others much, again I typically would not opt for these Pinlock motorcycle earplugs.

All in all, it’s difficult to wholeheartedly recommend these earplugs. They have advantages if you’re riding with partners, family or friends, but I find they just don’t block enough noise to prevent fatigue. I paid £17.50 a pair for these Pinlock earplugs, which is not cheap when weighing up their inability to prevent fatigue and their useability issues with the earplugs. It all boils down to how much you need to hear riding partners, how often and if you’re happy to compromise the performance and pay more cash for this luxury.

This review was originally published on my motorcycle blog Beginner Biker Adventures.