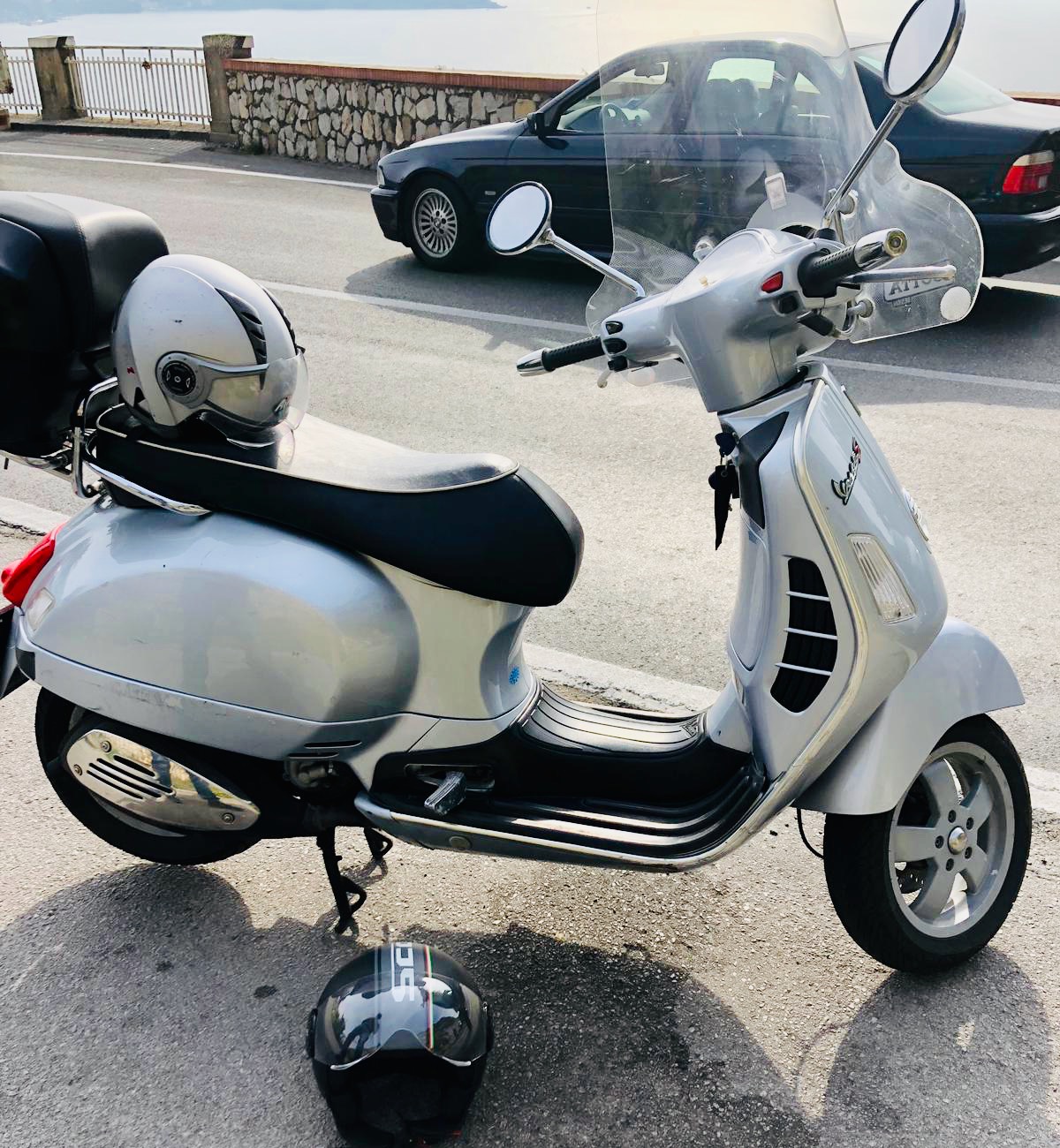 On a recent trip to Naples I decided to hire a Vespa (well it is Italy after all LOL) and go for a ride along the Amalfi coast. I’ve never ridden a moped before, well that’s a lie. I rode my sister’s Yamaha 50cc something or other up and down the park access road (I was 15 at the time), until my Dad caught me, but that’s another story.

How hard could it be? I’ve been riding for a while and am used to big bikes.

Well, it wasn’t as straight forward as I thought!! The Wife, Cheryl, and I duly turned up at the hire place after Googling the best place. The poor chap didn’t speak much English, but he spoke more English than I did Italian, so with much arm waving and LOUD speaking we managed to hire a Vespa for the day.

I edged the bike out, then Cheryl got on the back and I thought here we go, being an advanced rider (got the paper to prove it lol) I’ll pull away nice and smoothly, show off my skills. Well it didn’t quite happen like that. I don’t know why, could it be the bike’s steering, the small wheels, the pillion (I’ve never given a pillion a ride before). But I went veering left, then as I adjusted myself, veered right, I was like a child who’d just had his stabilisers removed for the first time. Cheryl must have thought what on earth have I let myself in for, and my Italian friend must have feared for his scooter.

After I composed myself and still a bit wobbly we made our way out to the main road. We had been in Naples for a couple of days already so I knew the traffic situation, which is horrendous. If you think London’s bad, it’s a walk in the park compared to Naples. They ride like it’s their last day on earth, and for some it probably is!!

We decided to take the motorway out to our destination, then ride back on the coast road. Motorway was fairly uneventful, apart from when we stopped for petrol. Firstly, I couldn’t open the fuel locker cap, then couldn’t start the bike. Anyway after a bit of playing around we got everything sorted and carried on.

Eventually we arrived safely in Salerno, had a look around, grabbed a coffee and something to eat and did the usual touristy stuff. After a while we decided to head back to Naples via the coast roads. Then the fun and the fear began. Now used to the Vespa and its little quirks, I was looking forward to the lovely roads. However they were very narrow and very very twisty, which was fun apart from when cars, coaches and lorries came hurtling around blind bends, I was just glad I was on something very narrow.

I normally ride sports bikes so I’m used to very good brakes, however, I think the Vespa’s brakes was made out of pasta, and being two up, stopping was a problem to say the least. I was having to trail brake (see separate article) around nearly all the corners, for necessity not fun and we wasn’t exactly breaking any speed records, such was the non existent brakes.

Every now and then we stopped for a quick break to mop the sweat off my brow and to look at the wonderful views. We soon started having problems with the Vespa, it was getting very hot and struggling up some of the hills. Eventually it just cut out and refused to start. We waited a while and once it cooled down it started again, it hadn’t lost any water, so it couldn’t be that?! We carried on again for a while, when it cut out again, so we did the same again and waited a while. I was now thinking I was going to get accused of breaking the Vespa and get charged for the privilege.

Anyway we pressed on, now on flat ground, trying to go fast enough to get a decent airflow, but not to thrash the bike to cause it to break down permanently. We got back on the motorway and continued to Naples, the temperature was staying constant but the Vespa was getting noisy. I decided to turn off, park up and call the hire centre. Again my lack of Italian and their lack of English caused a few problems. We ended up going into a local cafe after trying a newsagents and petrol station to get our problem with the Vespa across to the hire centre.

After a while another two Vespas turned up. One had their mechanic on board, he had a quick look and said the water pump had gone. He gave us his bike and we rode our now cool Vespa back slowly. The chap on the other Vespa was our guide back to the hire centre.
We had to follow him, and boy was that hard. He was off like a shot, in and out of traffic, playing chicken with lorries and coaches and there’s me, two up trying to keep up and more importantly keep us alive.

After what seemed like an eternity we made in back in one piece, and had a bit of a joke about his riding, he offered us coffee, I could have done with something stronger to be honest LOL! Thankfully there was no problem with the broken Vespa, no charges or complaints, so we said our goodbyes, and headed off back to the hotel for a well earned rest. It was an experience we will never forget, for both good and bad reasons.