We all hope that you enjoyed the last instalment of Progression for those of you that suffered we will endeavour to torment you further, with another one. This time I will enthral you with travelling on your bike to Spain, more specifically the French and Spanish Pyrenees.

Although we (Myself, Big Dave and Padraig) were not travelling until October I like to start planning hotels, routes, towns and attractions to visit in February. I also alter lots of things as time goes on i.e. better routes or hotels. As I’m a glutton for punishment I spend hours and hours working out the best routes. I have used some routes from Rider Magazine but as they say horses for courses and I found some of the routes quite boring.

Skipping forward to October we left from Buckhurst Hill at 6pm travelled to Portsmouth, getting on the ship at 8pm scheduled to leave port at 10pm for our 2 nights on board, which gave us an early start to the day when we arrived in Bilbao. Unfortunately, I do not have any sea legs and spent most of the time in the cabin feeling sorry for myself whilst the other two partied the night away. They occasionally popped in to throw me some water and a sandwich. When we finally arrived at Bilbao, I couldn’t wait to get off the bloody thing.

We headed off to Lourdes (yes, Lourdes the religious place!!) for our first 4 nights at our hotel. We had never been and it was relatively easy to get up into the mountains. We planned for 200 mile day trips. I calculated that at an average speed of 30 mph and with scenic/photo/coffee stops (and there were plenty of them), it was a good day’s riding. Finally getting back to the hotel to spruce up and going out for a well deserved meal and pint (maybe several). We did have one day off due to torrential rain and fog, we managed about 50 miles but as we got higher the visibility became impossible so decided to call it a day for safety reasons. We took the opportunity to look around Lourdes which was very interesting but lots of tacky souvenir shops and of course stop to have another pint.

The point of going to the Pyrenees was to find amazing views and roads – it didn’t disappoint. The routes we used were full of hairpins/ off and on camber (which almost put the Stevio pass to shame) which really tested the nerves but after several days of practice it became second nature and we were pretty accomplished at hairpins at the end.

For the second part of the trip we travelled down to Sort on the Spanish side for another 4 nights which was totally different to Lourdes, much quieter more picturesque. The roads around this area were amazing, especially the N260. It’s the weirdest of roads, going from wide and free flowing to single lane tight Twisties in a dark gorge and obviously the local bikers liked to show us their stuff, blasting past us at silly speeds.

We took the time to head off to Andorra, stupidly going on a Sunday. We were greeted by the fag and booze run unbeknown to us it was about 10 miles long luckily we ended up following the locals and was up the front in a jiffy. Personally I didn’t like Andorra, bit of a dump and I’ve never seen so many speed cameras, but we did manage to find a Motocard Motorcycle shop and a great find JARDINS DE JUBERRI (I’ll let you look that up) and all free entry.

For the last leg of the trip (or so we thought) we travelled again using the N260 road and arrived at the beautiful medieval town of Puente La Reina (Spain) with some very interesting architecture, quiet back streets and quaint cafes we loved this place. So it was back to the hotel for food and possibly the biggest G&T ever and believe me I needed it as the bombshell from Brittany Ferries landed…

Unfortunately they had technical issues with the ship and they couldn’t get the bikes on the ship!! We were understandably furious as this was the second time this had happened in 2 years. So basically it was a 620 mile slog to Caens (Northern France) but luckily for us and due to timing at least we had 2 days to get to Caens. So I booked a B&B in the middle of nowhere and we headed off at the crack of dawn. What I didn’t take into account is hitting Pampolona (Spain) in the middle of rush hour and it was nuts and unfortunately we completely lost Big Dave but we did manage to reunite 320 miles later, drama over. After a fantastic home cooked meal and a bottle of superb wine it was off to bed ready for the next leg to Caen (Northern France). We arrived quite early so managed to have a good look around. I’d never been to Caen and was pleasantly surprised how nice it was. Another good meal and a few pints of Leffe it was off to bed ready for another crack of dawn departure to good old blighty and on arrival it bloody rained. 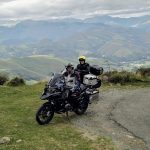