So I have been badgered by Arthur into writing a review of my new bike. That is the trouble when your other half is on the ELAM committee!

I have wanted a Triumph since I was a teenager, which is a long time ago now. I used to knock about with some bikers who had old Bonnies and I have loved the aesthetic, the slim lines, the torquey twin-engine and its ability to negotiate those country twisty roads which we all love. The old Brit engineering with the oil-bearing frame and the total loss oil system? Not so much. 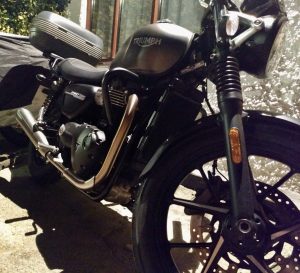 The Triumph Street Twin encapsulates the best of both worlds. It is a bike which captures what is so attractive about the older Bonnies, the tidy lines with the attractive tank that flows straight into the comfy seat, the neat twin engine with bags of torque which sits tidily underneath and that lovely thud as it runs. It does so with the reliability of a modern bike which I view as essential- it starts without complaint on cold and damp mornings, it is smooth and intuitive when ridden.

When I test rode my current bike I did so without intending to buy a brand new bike. I went into the Lind East London Triumph dealers with the intention of buying a second hand Bonnie. After all, I can only afford to keep one bike and I use that bike to commute to work and for pleasure. It has to be something of a workhorse.

In my case, the dealers at Triumph East London were great and actually listened to what I needed and wanted in a bike. Some dealers (thankfully not so many these days) can dismiss women as serious purchasers of motorbikes and gear. In a sector currently in a state of stagnation, which was before the pandemic, the only group actually increasing in number were women riders.

Lind reserved the bike overnight so that I could think about the purchase – they didn’t pressurise me into making a purchase there and then, which I really valued. When it came to fitting accessories they kept in touch with updates of stock levels and when I could have them fitted in the workshop.

I test rode the Triumph Street Twin in the afternoon and fell in love with it. All of my previous bike purchases have been something of a compromise- I’m short in height and in the past, I was also short of cash. So to ride a bike which has effective ABS brakes, where there is enough power to overtake easily, where I wasn’t straining to reach the handlebars, was something of a revelation. To ensure I had a good idea of how it would cope with different riding conditions I tried it on the motorway, small country lanes, normal A-roads and country twisties. On A-roads and smaller country roads is where it’s happiest, the torquey engine powers out of bends with ease. It isn’t faired, so on motorways, it was always going to feel like it struggled. However, it did keep up with motorway traffic but definitely benefited from having a fly screen fitted to ease the drag from travelling at speed. As a short arse, I never expected to flat-foot this bike, but I can get the balls of my feet down. Some people choose to lower them but I was told this would invalidate my warranty.

The bike comes with a single retro-looking analogue speedo display with a digital interface which can cycle through lots of different information- odometer, rev counter, time, fuel gauge, fuel consumption, trip mileometer etc. These are accessible through a single I button on the left handlebar. Heated grips are not standard, but I had these fitted as I ride through the winter and I view these as essential. These work well and are integrated into the digital display with another single button. There is a rain mode as well as the standard ride mode which reduces the throttle response, helping to reduce any sudden acceleration in the rain. I did find when I first rode the bike in heavy traffic the clutch tended to be a little snatchy in lower gears and rain mode helped with this as well. Like all things though, when I had more time onboard, the ‘snatchiness’ went as I became accustomed to the bike and accommodated this in my riding technique.

One point of comedy was the name of the colour scheme. The bike comes as Jet Black as standard, then Cherry Red and Matt Ironstone as special colours at an extra cost. My colour choice of Matt Ironstone was decided by the fact that the bike I took out for a test ride was cheaper due to it being a test bike. It does go well with the overall aesthetic of the black engine cases and side panels, even if it does sound like the name of an adult actor.

Overall I am extremely happy with Matty, as I have now called her. Due to the pandemic, I am limited to mainly commuting to work in the dark at the moment, but I am looking forward to sunnier days and more trips and miles on board. If you are thinking of buying one, give a test ride a go- you won’t regret it.