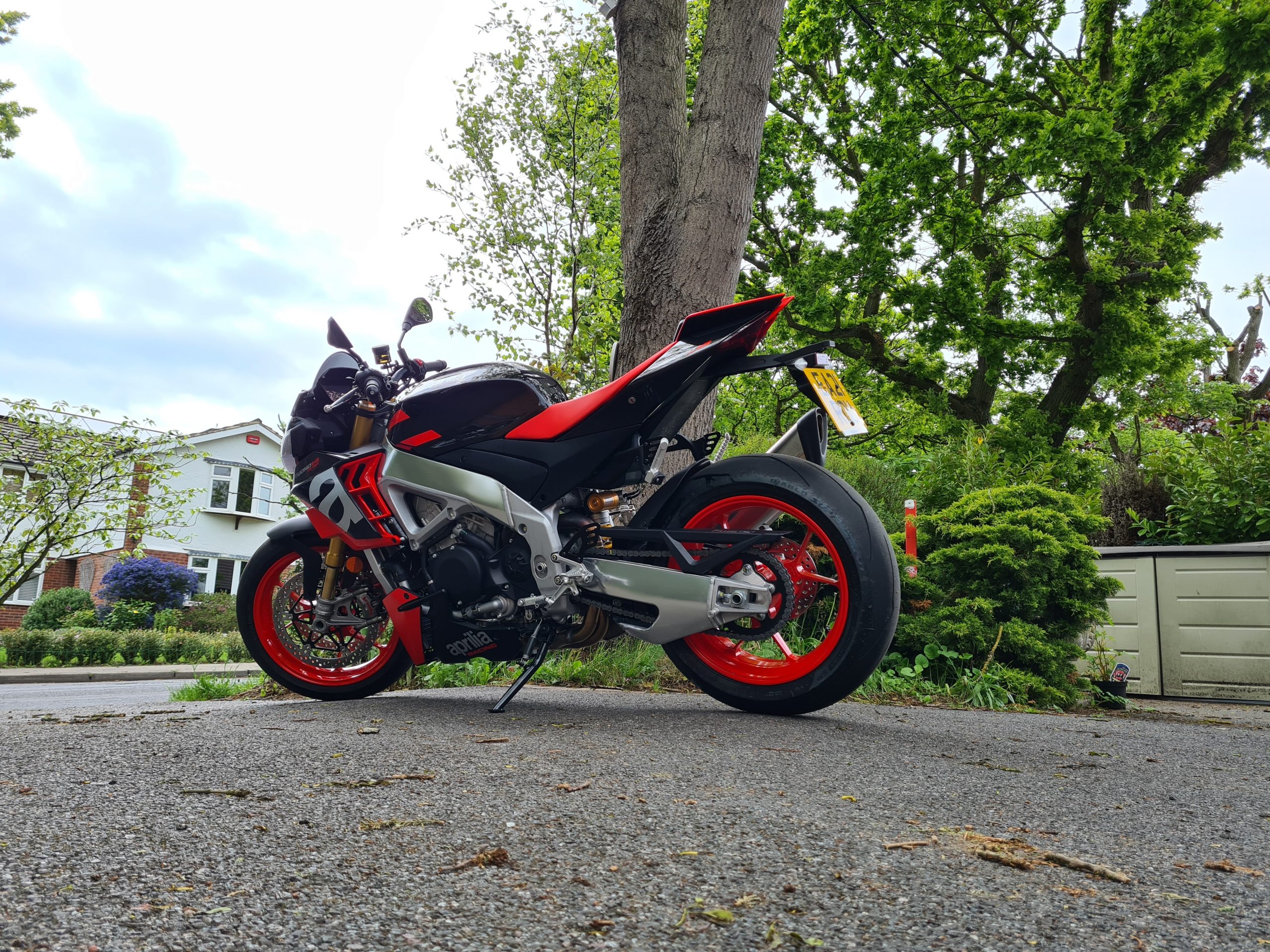 After years of Ducati ownership, there’s been plenty of ups and unfortunately plenty of downs, however, I have been faithful to the brand, but I now felt a need for a change. Either way, my Ducati replacement will still be an Italian.

So what did I choose? Well, when I first saw this bike a good few years ago now, I wasn’t keen on it, to be honest, the looks didn’t do it for me. We do buy with our eyes, don’t we? 😉 Over the years, my opinion of the looks changed, maybe because of the fantastic reviews I have read and watched have put the looks to the back of my mind, or perhaps as I’ve got older my opinion of what looks good has changed.

Anyway, I never heard a bad word about the bike, so it must be good, surely… 🤔 So not to keep you in suspense, the bike I chose to replace the Ducati is an Aprilia Tuono, and I didn’t even test ride one, am I mad?! What if I got a bike I don’t like, that would be a massive c#&k up wouldn’t it?

When the time came to swap the bikes over, I actually drove to the dealership, it was a horrible wet day. I obviously didn’t want to get the Tuono dirty, but the main reason was not to get my old bike damaged, I am a natural glass half full kind of guy, and with the amount of freshly “road dressed” roads I might have made the right choice. So I got the bike safety home, put “Ronda” safely to bed, it was 8 days before I even rode her for the first time 😳 – mainly down to work and the weather, let’s face it she is Italian and we all know they don’t like water! 😂

So what are my first impressions of the new beast? Well, to be honest, I’d be lying if I said I wasn’t a little disappointed. After reading and hearing how great the bike was for years, I guess I was expecting to be totally amazed, have my socks blown off – well it didn’t happen, not for me anyway.I’m not saying it’s a bad bike, all the reviews can’t be wrong, I don’t think I’ve ever seen a bad review of a Tuono, and I’ve never heard an owner have anything but kind words to say.

So is it me, is my riding style not suited to a Tuono? Or is it that Ducati’s are not just bikes with fancy dresses on ,and in fact they are extremely good, and that’s why you pay a premium for one?

Obviously now I’ve got to put up with the Tuono, there’s no way I’m going to get rid, as that would be stupid for the depreciation alone, so a better solution would be to find out why I wasn’t blown away and try to find ways to improve what I didn’t like and why I didn’t like. Maybe it’s time to write a list, isn’t that what people say when your not sure if you like, want or need something.

Things you “LIKE” and things you “DISLIKE” – Bloody hell! I sound like my Mother (sorry Mum ❤️). Well here goes:

Style (got plenty of nice comments), colour scheme, not a lot you can do about it though if you didn’t like it, it only comes in one colour scheme, a bit like Henry Fords Model T, you can have any colour you want as long as it’s black. 😂 Equipment levels, it doesn’t want for anything – electronic suspension, quick shifter, auto blipper, fancy dash, all the rider aids you’d ever need. Great engine, brilliant exhaust note, even with the standard exhaust, it’s very addictive. 😁 Riding position bottom half anyway, legs nestle right into the tank for great support. Mirrors that you can actually use and see out of, Ducati owners will know what I mean… 😂

Riding position top half, although the bars are flat, they still seem to make my arms ache, obviously nowhere near as extreme as my sport bike it replaced, but honestly, I thought I’d be in a nice comfortable position. That’s the trouble when you sit on a bike, the riding position might feel good, or even bad, but can you really tell until you have actually ridden the bike, through all kinds of riding. The footpegs are so grippy, this may well be a good feature, but for me, as I ride on the balls of my feet and slide my foot down to change gear, with these pegs, my feet just grip, so I have to actually lift my foot off the peg to reposition it to change gear, a bit of a pain, for me anyway. The quick-shifter, I have heard from numerous sources Aprilia have mastered the quick-shifter, but at the moment (may need time to settle in?) it’s very jerky at lower RPM, to the point I’m just using the clutch. Yes, I’m aware the higher the RPM the better the change, however, most bikes fitted with quicker shifters still work to a suitable standard at lower RPM. The weight or maybe the position of the weight, although the bike is no heavyweight, it bike feels quite awkward when moving it about, this may be because I’ve got used to the weight/balance of my old bike, I’ve nearly dropped it a few times. 😳 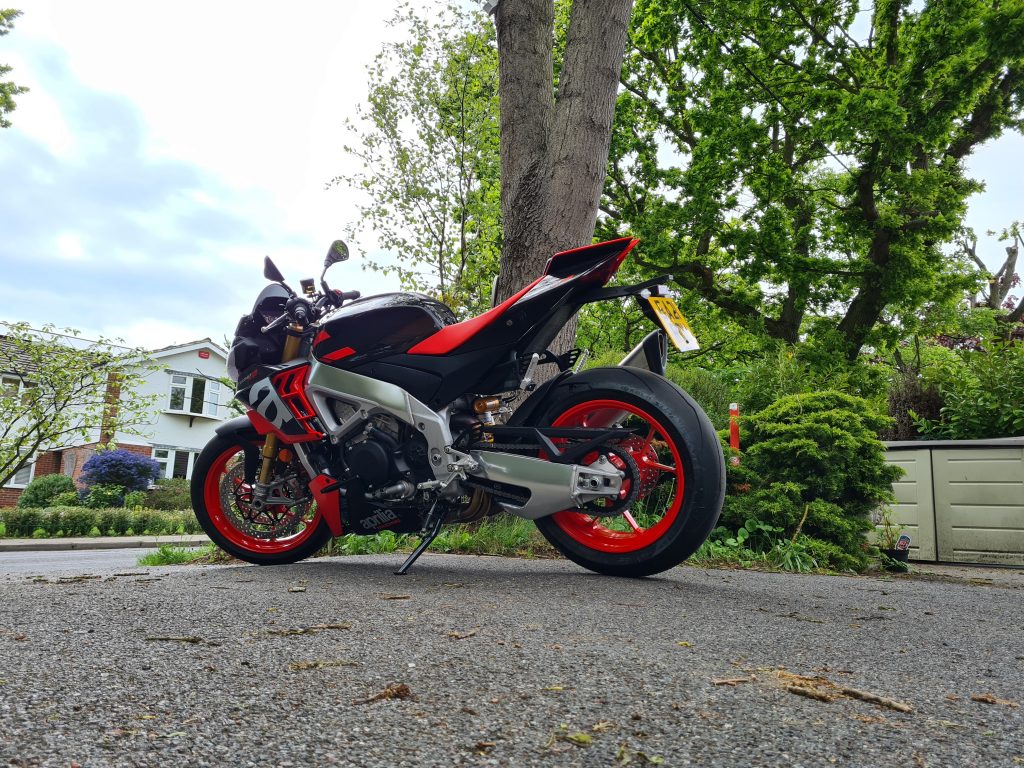 Can the Tuono cut it in on track? By all accounts, it’s more than capable and the figures do in fact back that up, in fact, unlike most super naked’s, the Tuono is, in fact, Aprilia’s full spec RSV4 (really a road-legal track bike), with flat bars and a bit less bodywork. However, that doesn’t mean it would suit me on track. As with everything, what is good for the goose isn’t necessarily good for the gander. Maybe the Tuono needs to be ridden by a very good rider to be appreciated or even get the bike to work properly, an average rider like me might not be able to get the bike to work as designed, so the feeling could be horrible?

Well, to be fair it wasn’t a full track day, it was a California Super Bike School (CSS) day, more a training day on track, but don’t tell the Tuono 🤫 Like I said I’m no track day god, but do like to go faster than allowed on our roads and test myself, I would say test the bike, but I doubt I’ll get anywhere near the bikes full potential, I doubt I’d even get to half its potential, but that doesn’t distract from the event (I will do a little piece on the CSS day).

Well on track the bike was great, I actually ached less riding on the track, than on the road, maybe that’s the adrenaline (😂) or the fact you move about more, sort of extra exercise. It did all that I needed, (very well in fact) it’s probably more bike than I ever need, maybe that’s what it’s really designed for, older riders who can no longer hack the sports bike position. Maybe it’s a general bike for the grandad (or Nan) who still loves the thrill, the buzz, the speed, but has a body that can no longer suffer the extreme yoga positions you need just to ride them.

So what are my final thoughts on the Tuono, now that I’ve had it for a while and tested it in different scenarios? Yes, I am warming to the bike, but it didn’t jump out at me at first. Like a lot of reviews say, I didn’t find it to be one of the best bikes ever made. Maybe that might be a lot to do with the motorbikes I’ve previously had, to be fair, I have been spoilt and count myself very lucky to have some cracking bikes.

If you came from a middle of the road or budget bike then maybe your socks would have been blown off. So at the end of the day, the problem may be me and not the bike at all 🤔