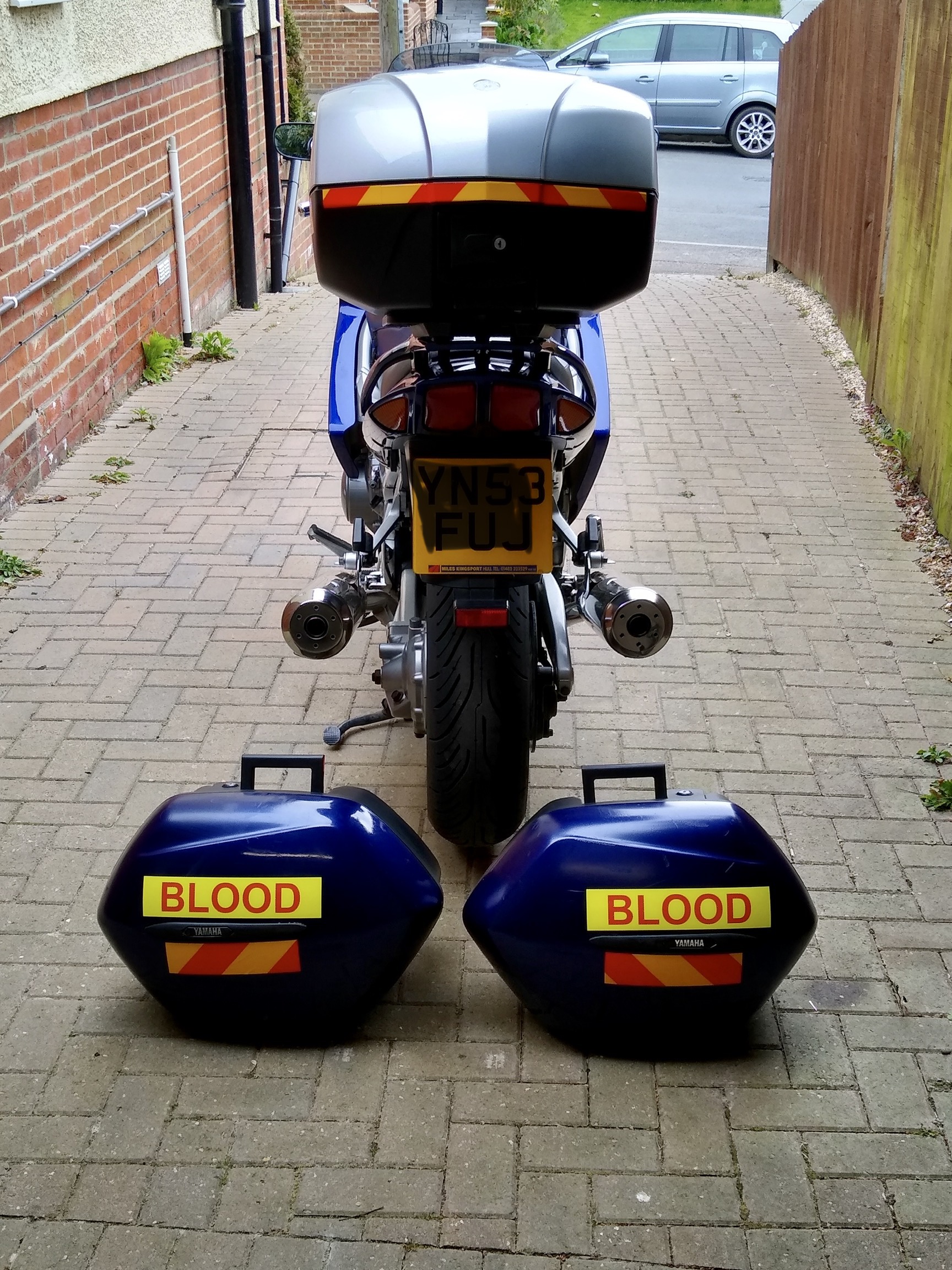 I joined ELAM in around 2017 and gained my IAM advanced level in June 2019. During that time I took part in many interesting activities related to motorcycling, but one evening presentation to ELAM members on volunteering as a Blood Biker left a lasting impression on me and I promised myself I would get involved at some time. I subsequently moved home out to Colchester and my involvement with ELAM reduced.

Fast forward to early 2020 and Coronavirus, and a couple of weeks back I saw a message on Facebook from EVBS seeking extra volunteer riders and driver’s, plus general support and fundraising help.

I made contact with their Controller who was quite local to me in Wivenhoe, and found out some more about their activities and what you needed to become a Blood Biker. They were experiencing a large increase in Hospital requests to transport blood and products around the many Essex hospitals, and wanted to expand their free service to cover days as well as normal nights and weekends.

It was explained that in order to be considered as a blood biker/driver you needed to have full licence for at least 2 years, vehicle had to be taxed, MOT’d and insured, be prepared to declare any convictions and provide vehicle details including insurance, breakdown and registration numbers.

I confirmed my interest and this is what happened:-

The controller introduced a senior trainer to all recent volunteers, and he sent out an information pack for us to read. This included background on the national blood service generally as well as a potted history of the local group and fairly detailed description of the various products we would transport, where to, what documents would be involved, rota’s and shifts likely to be needed.

Newer volunteers then attended a virtual training session via Skype, to allow small groups to go through various training documents to understand how blood and other products were to be handled, secured, temperatures maintained, protection from the elements achieved, documents and handover receipts completed and protected.

We also covered areas such as legislation and quality standards that were applicable to the safe storage and transport of the products and how important it was that we followed guidance at all times to ensure compliance. It was soon apparent that an advanced riding/driving pass was needed as well as a mature and responsible approach. It was not a blue light service and all speed limits were to be followed.

We found out that all activities were at our own risk, at our own cost and even that we would be expected to pay an agreed sum towards the charity to cover such items as a specific EVBS high viz jacket/ta-bard and receipt book and if we we were lucky some EVBS signs for our bikes.

We also completed a quick multiple answer questionnaire to cover the main learning areas covered. Once all documents were completed and sent back to the Controller we arranged to pick up laminated ID cards and high viz jackets once they were available along with signs and other bits and pieces.

We were also supplied with written detailed routes that had to be followed between hospitals and the main Blood Bank at Basildon, as well as for blood deliveries to the two air ambulance bases at North Weald and Earles Colne. There were also routes to allocated hand over points for adjoining volunteer groups, such as Kent and Suffolk/ Norfolk.

Detailed plans were provided for each hospital to show routes to pick up or drop off locations for each. For the airbases there were even more detailed guides including security codes etc.

Individuals then accessed an online rota system to enter dates they were available to start volunteering. The rota’s generally allowed the controller to obtain the numbers needed for each shift, and in general new volunteers were keen to get started.

Individuals joined the Facebook and WhatsApp groups, to introduce themselves and to get more help and advice. A common theme was to get new members joined up with experienced members so that shadowing on shifts could be achieved.

Plenty of photos were shared obviously, as well as advice on how to secure one or two blood boxes to a range of different  motorcycles. eBay has been doing great trade in bungee cords, cargo nets, RokStraps and a multitude of high viz chevron’s and emergency blood signs.

Volunteers are starting on call outs, and gaining experience and reporting on their progress and further new volunteers are coming in board. Unfortunately, it transpires that due to some health conditions I have been classed as vulnerable, so visiting hospitals is not advisable. But I’m hoping that in due course I will be able to help out on supporting the two air ambulances with blood runs or local milk runs.