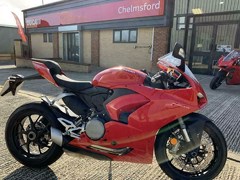 Oh no, not another Ducati review I hear you say, The dealer lives near me, I get on well with them and they trust me with their bikes, so why look a gift horse in the mouth. Also, because of Covid, you can’t just turn up at dealers and take a test ride, hopefully, that will change soon and we can enjoy the odd test ride or two.

My first Ducati was an 899 Panigale which I loved, I missed out on the upgraded 959 Panigale simply because I didn’t like the exhaust set up. Even Ducati wasn’t keen as all the official pictures show the non-exhaust side! The V2 is basically the same engine as the previous 959. Ducati however has spent plenty of time improving the looks, the awful (my opinion) side-mounted dual exhaust has been ditched in favour of a single exhaust much lower down, still not as pretty as the 899 (again my opinion). The V2 now looks very similar to the flagship V4 Panigale, perhaps why they chose V2 name tag. Ducati has for the first time on the baby Panigale gone the single-sided swingarm route which looks great, along with the new bodywork aping the V4, there’s a new all singing and dancing dashboard all in glorious colour. There’s now an auto-blipper to go along with the quick-shifter. Right, with the looks sorted, let’s take it for a spanking, whoops I meant a test ride.

I fire the bike up and get the usual V twin rumble and vibrations, so off I go in search of some twisties. The bike is comfortable as a sports bike can be, that is not too cramped, you don’t feel like a contortionist when you’re on board like some sports bikes. You get the normal low down vibrations you’ve come to expect from a V-twin, but it’s not as bad as it used to be. The exhaust note is distinctive Ducati and the controls are laid out nicely. The engine power builds beautifully, with nice direct throttle control, it gives you a bit of time to get ready for when the power really kicks in at high revs. The quick-shifter was one of the best I’ve used, as was the auto-blipper, neither missed a beat. The brakes are awesome, full of feel and power – I even manage to do a stoppie and no it wasn’t done in an emergency. I like to test the power of brakes, so I find a nice quiet road to test the full stopping power when on any bike to test the full stopping potential. It’s alright being on a fast bike, but it’s no good if the brakes can’t handle it. Brakes are often overlooked, they’re not attractive as power figures, but ultimately more important.

Steering is sharp and direct, the bike is well balanced and a pleasure to ride, however that’s if you like sports bikes. It may not be as nice when stuck in traffic or commuting. It does get very hot under your bum, not so bad when you’re moving fast enough to create a draft to dissipate the heat, however, imagine being stuck in traffic on a hot day in your full bike gear, phew! 😂

The V2 comes in 2 flavours: White or traditional Ducati Red, I personally prefer the white however there’s a premium for that, of course there is 🙄 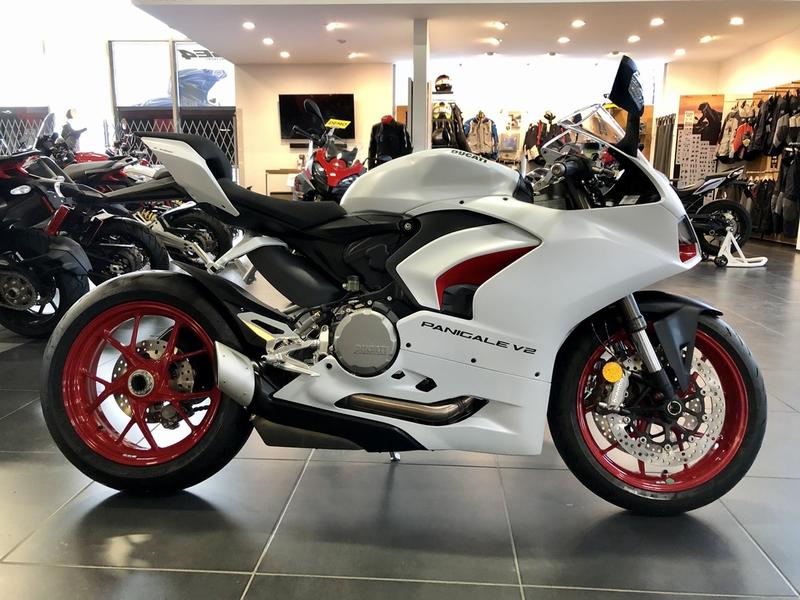 Like most new bikes, the V2 comes with the full electric package, riders modes etc. It’s a great stepping stone if you want to move into the sportbike scene, with plenty of power and fantastic handling, but not insanely powerful like the current crop of the 1000cc monsters and going by the previous incarnations, it’ll be great on the track.

Thanks to Hyside (Ducati Chelmsford) for trusting me with their bikes